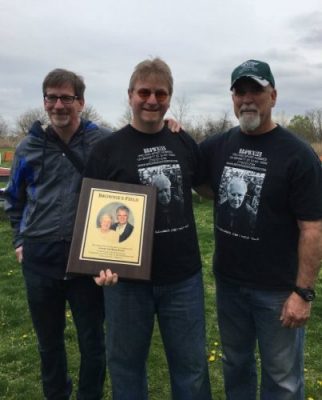 The Staten Island RC Modelers held a ceremony on April 22, 2017 to honor the late George and Mary Brown.

The plaque, presented to their son, John Brown, read,

“Brownie’s Field, This flying field is dedicated to the memory of George and Mary Brown in appreciation of their devotion, commitment, and friendship to the club members of Staten Island R.C. Modelers.”

John is now the owner and manager of the hobby shop.

According to John, George and Mary helped start the club in 1973 and George helped countless people learn to fly and many later became instructors.  This legacy continues today.

John shared,
“Just before the one-year anniversary of Dad’s passing, Gene Gavin (an SIRCM member) approached me and asked if it would be alright if the club dedicated the field in memory of both Mom and Dad,” John continued,  “Gene is one of Dad’s prized students!” “He’s also a great friend of the family.”  “Of course, I was totally onboard with this wonderful honor.”

“So, on April 22, on a cold rainy day, we had the field dedication ceremony.  Gene spoke and had so many wonderful things to say about both Mom and Dad.  My brother, Robert, was there and spoke about how the members of the club were all our extended family.  I feel this way also.”

There are no upcoming events at this time.